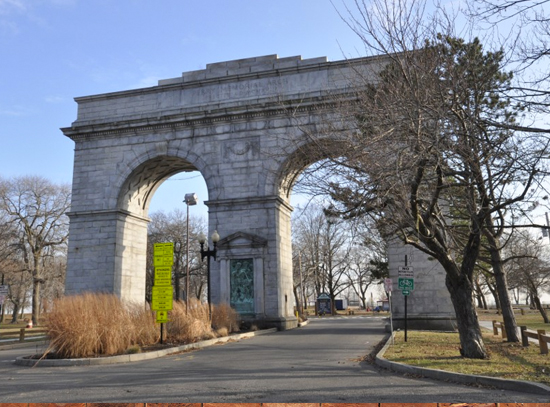 Entrance at the southernmost end of Park Avenue, Bridgeport
Website

With its 325 acres of lush lawns, shady glades and sports fields rolling
toward Long Island Sound, Seaside Park is a park without peer on the
Eastern Seaboard. Visitors are delighted by the beaches, surf and sunshine
along three miles of sparkling coastline. The park was laid out
just after the Civil War by Calvert Vaux and Frederick Law Olmsted,
whose other efforts include Manhattan’s Central Park and Prospect Park
in Brooklyn. Their 19th century landscapes have proved timeless as they
entice each new generation of park-goers. At the western end of the
park is Fayerweather Island. Walkers can visit this natural wildlife preserve
by crossing the breakwater rocks. The island’s lighthouse guided
navigators into Black Rock Harbor from 1823 to 1932.

Bridgeport’s most famous resident, the 19th century circus impresario PT
Barnum is largely responsible for the development of the park. Once pasture
land, wood lots and salt marshes, Barnum envisioned the first marine
“rural” park in the United States. Open daily from 8 am to 8 pm. Free
admittance with no permit required from Labor Day to Memorial Day.

Among the prominent art at Seaside Park are the sculptures of PT
Barnum created by Thomas Ball – bronzed in 1887 and Elias Howe by
sculpted by Salathiel Ellis. A female figure atop the Sailors and Soldiers
Monument faces Long Island Sound with her arm out-stretched holding
a laurel wreath to honor those who served and sacrificed in the Civil
War. The monument was created by Melzar Mosman. Through a partnership
with the Friends of Seaside Park and City Lights & Company, in
2009 a missing liberty figure was replaced with a new cast created by
Emily Bedard.