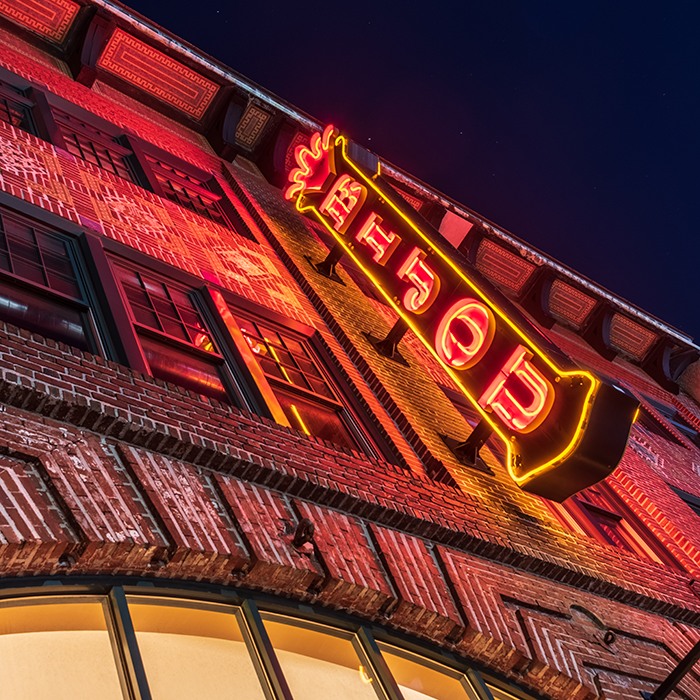 The Bijou Theatre is a fully renovated multi-functional venue for live performances and film as well as business and social events. Join us for a full weekend of events!

In continual operation for over 100 years, it is one of the oldest buildings used as a movie house in the country. The Bijou Theatre is a fully renovated multi-functional venue for live performances and film as well as business and social events. Join us for a full weekend of events! Check out our website for future live performances and screenings.

Event: Larger Than Life “The Ultimate Boyband Tribute!”
Friday, November 11; starting at 8 pm, doors open at 7 pm
Performing over 40 boy band songs by the Backstreet Boys, ‘NSYNC, New Kids On The Block, 98 Degrees, O-Town, Boyz II Men, LFO, One Direction, and many more! And for extra fun the boyz take you back
even further with hits by The Jackson 5, Temptations, Four Seasons and other classic male groups. This is the only act of its kind featuring actual boy band singing, dancing, costumes, and that pop look. Larger Than Life will take you back in time with the biggest 90s Party since the Backstreet Boys shut down Times Square.

Event: Faces in My Fist by Lisa McCree, Read’s artist
Saturday, November 12; 12 pm
For Harry “Brown Panther” Wills, the “World Colored Heavyweight Championship” was not enough. Wills, wanted a shot at the “World Heavyweight Championship, and for that, he’d have to defeat Jack Dempsey. Alas, Wills was a victim of the “color line” drawn by the white heavyweight champions of his era. Fast forward, Wills is old now, sipping his morning coffee with the demons that haunt him from his past.
He talks to them, blames them, and invites their spirits to materialize from old dusty posters hung on the wall of his dilapidated gym in Harlem. This has been his routine for years. One morning he enters his gym,
and his life changes forever. 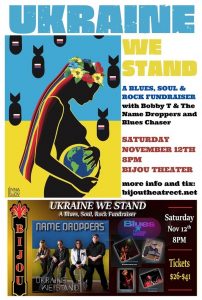 Event: The Name Droppers Fundraiser to Support Ukraine
Saturday, November 11; starting at 8 pm, doors open at 7 pm
The Name Droppers are a popular blues, rock and soul band that hails out of Fairfield, Connecticut. They have a very unique sound that blends elements of blues, rock and soul. Accomplished players are Rafe Klein on guitar/vocals (played alongside blues legend with Charlie Karp), Bobby “T” Torello on drums (former drummer for Johnny Winter Band and inducted into the Classic Drummer Hall of Fame), and Cott Spray on bass, (playing on Johnny Winter’s Grammy Award-winning album “Step Back”), Ron Rifkin, a keyboard powerhouse, (a sought-after studio session musician who has played on recordings and live with Charlie Karp).
Blues Chaser will rock you with music from three critically acclaimed albums. The lineup is impressive: Big Thurrsty, Blues Hall Of Fame inductee; Tony Delisio, a member of The George T. Gregory Band (James
Cotton) & Lee Oskar of WAR; Joey Primo, a master of the B-3 organ & member of the Blues Society All-Stars, played with Lucky Peterson & Bruce Katz; and Tom the suit Forst, a two-time Blues Hall of Fame inductee who recorded with Grammy winner Paul Nelson (Johnny Winter Band) and has been written up in Forbes Magazine.

FREE SUNDAY EVENTGS AT THE BIJOU 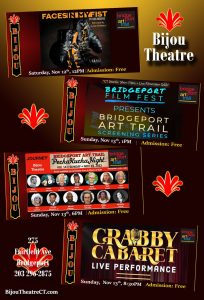 Event: CONNECTICUT STORIES: A Series of Short Films +
Filmmaker Discussion
Sunday, November 13; Doors open at 1 pm, screenings from 1:30 pm to 3 pm
MUNCH & MOVIES, purchase a beverage from the Bijou bar and help
yourself to a complimentary nosh. Featuring local filmmakers and musicians from the Connecticut area sharing their original short films, documentaries and music videos followed by a post screening Q+A with the
filmmakers. This free event is curated by Jason A. Coombs, the Artistic
Director of the Bridgeport Film Fest #28. Price: Free but donations
are accepted.

Event: PechaKucha Storytelling Night, a Bridgeport Art Trail Closing Party Tradition
Sunday, November 13; 6 pm to 8 pm, doors open at 5 pm
www.pechakucha.com/events/bills-event
Wind down after a weekend full of art with storytelling, live music and good meal offered for sale by Chef Raquel of A Pinch of Salt, paired well with a beverage from the Bijou bar. Among the storytellers are
Bridgeport Art Trail artists. This year’s event theme is Journey, How Did We Get Here? The art of conversation and community connection is celebrated through the sharing of personal stories at PechaKucha Night Bridgeport bringing people together from diverse backgrounds.
For info on PechaKucha presenters go to pechakucha.com/explore?query=Bridgeport. pechakucha.com/communities/bridgeport.

PechaKucha means “chit-chat” in Japanese. Speakers present their stories accompanied by 20 slides, shown for 20 seconds each, resulting in a total time of 6 minutes and 40 seconds. This licensed format keeps presentations focused and fast-paced. PechaKucha Night Bridgeport is
intended for adult audiences.
The event is free. Contributions are used to defray operating costs. One dollar of each contribution goes to support the international PechaKucha organization. PechaKucha Night Bridgeport is organized by
The Barnum Museum #8, City Lights Gallery #20, the Downtown Special Services District, and Nina Lesiga.

Event: The Crabby Cabaret
Sunday, November 13; 8:30 to 10 pm
Instagram: www.instagram.com/CrabbyCabCT, Facebook: www.facebook.com/
CrabbyCabCT Contact: CrabbyCabCT@gmail.com
Come down to the Bijou Theatre for the inaugural performance of the
Crabby Cabaret which features an evening of laughs, uncomfortable
feelings, and downright sassy fun starring an eclectic group of local
vocalists, musicians, poets and storytellers. Our mission is to promote
interest in the arts, and to showcase the untapped resources that are in
our artistic community. We hope that our show will inspire someone to
pursue their dreams, even if they are small steps to a larger goal of realizing their full potential! Free but donations are accepted.

A high-energy act performing the hits of the King and Queen of Latin Pop, Shakira and Enrique Iglesias! live instruments and incredible vocals. Get ready to experience the biggest Latin party around! Brought to you by LTL Entertainment. Tickets are $27 to $42 at eventbrite.com/e/shakira-enrique-iglesias-tribute-tickets-156562652107

Winners of CTNow’s Best Tribute Band for 2018 and 2019, Connecticut Transit Authority faithfully recreates the music of one of the greatest American bands ever, Chicago. They focus on the early years of Chicago, better known as the “Terry Kath Era” when the band was raw with emotion, heart, and soul. Songs from Chicago’s 1969 debut album Chicago Transit Authority through 1977’s Chicago XI are covered here with attention to detail and respect for the originators of these timeless classics. The setlist contains hits like Does Anybody Really Know What Time It Is, Make Me Smile, Beginnings, Just You ‘n Me, Dialogue, Old Days, and many more. Tickets are $24 to $39 at eventbrite.com/e/chicago-tribute-ct-transit-authority-tickets-94268047267

The old saying holds true for the Jackson family, “Everyone who drinks from the same well, shares the same sickness.” Mid-summer, 1970: Sophia, a colored woman, has just returned home from the funeral of her lover Mattie, a white woman from Carrollton, Mississippi. Expecting her guests to arrive any minute, a knock on the door changes everything… inside and out. Masks required.

“..a crazy instrument builder who can get virtuoso riffs from anything.” The Village Voice Ken Butler’s musical performance closes out the BAT weekend on a high note, truly reflecting the theme of the 2021 BAT, Discovery and Re-invention. His creations are on view at Ursa Gallery #20D in the exhibit that addresses global warming and economic and social justice issues related to it. Ken Butler builds and performs with instruments made of found objects. You know the saying one man’s trash is another man’s treasure. Ken creates these unique string instruments using all sorts of found/ discarded objects from a vintage ax, tennis racket, a rifle gun stock, even a tailor’s female mannequin. His playable constructions resemble guitars to cellos. He calls his work “Bricloleuthiery”. This is the combination of bricolage- creating something from whatever is available and leuthierythe artisanal practice of constructing and repairing string instruments. Butler will discuss and present various instruments and then play them! Critics describe his music as “mesmerizing world textures and driving melodic grooves with passion and purpose on an amazing arsenal of amplified hybrid string instruments made from household objects and tools. Duchampian Dada meets Hybrid Hindu Hendrix as function and form collide in an environment of hyperactive hardware. Butler blends aspects of Mid-Eastern, Indian, Flamenco, and Roma modes with jazz, rock, funk, and blues, all held together by an open, edgy “downtown” improv aesthetic. Virtually indescribable and unclassifiable, Butler mixes high and low technology and audio-visual antics to create an ancient/future music that forms a provoking cultural portrait of human / machine adaptation and transformation