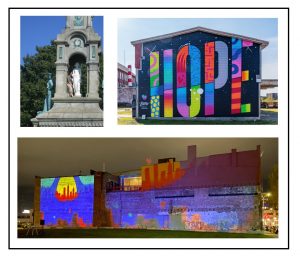 Art in public spaces brings art to where people naturally congregate. It beautifies and activates spaces, reflects heritage and supports placemaking. The creative spirit in formidable. Art can be part of the disruption as well as part of the problem solving and healing process. Throughout the Covid season, artists and creatives have inspired us, enriched us, entertained us, and kept us socially connected while we needed to be physically distant. The arts bring people of diverse backgrounds and points of view together to share a cultural exchange, prompting us to enjoy differences and celebrate commonalities; inviting us to think, feel, and perhaps do something differently.
This page is under construction, images coming soon.


The Knowlton Walls Mural Park
305 Knowlton Street
Shiran Nicholson, founder and managing director of the Knowlton, initiated a series of murals at the site on the Pequonock River. Knowlton Walls is a great destination for people to enjoy large art outdoors and have a photo opportunity to share with friends, family, and colleagues. The project is continually expanding, bringing in talent from around the country to create more stunning walls for years to come. Learn more at: https://theknowlton.com/knowlton-walls-mural-park/

The Freeman Sisters Mural by Aisha Nailah
1135 Main Street
The art of Bridgeport artist Aisha Nailah pays tribute to the legacy of Mary and Eliza Freeman, adorning the wall of the current site of the Freeman Center. The mural also commemorates and celebrates the decades of efforts by historians and residents to reincorporate the story of the Freeman sisters into local and national history.

Born in Derby, CT, sisters Eliza (1805-1862) and Mary (1815-1883) Freeman were women of African American and native Paugussett ancestry who proudly made Bridgeport’s “Liberia” neighborhood their home. Both developed, bought, and sold real estate, managed property, and financed home purchases before women had the right to vote! When Mary Freeman died, the only Bridgeporter of greater wealth was PT Barnum. The homes of the sisters, under restoration, are listed on the National Register of Historic Places for their significance to African Americans and women. Their story highlights Little Liberia’s legacies of freedom, entrepreneurship, and social innovation.

The Painted Steps by Liz Squillace

Perhaps the most popular piece of public art in the city. Community partners Bridgeport Generation Now, the Downtown Special Services District, and the Cultural Alliance of Fairfield County supported Liz’s vision with funds and even helped to execute the painting. It is a popular spot to congregate for music, and a photo op. The Steps span the distance between City Lights Gallery and the newly-relocated Neighborhood Studios of Fairfield County.

Bridgeport artist Alicia Cobb has created a mural on a Middle Street building with a celebrated musical history, and she made music the primary focus of the design. In addition to the musical  instruments depicted, there are elements specific to her view of Bridgeport. For example, circles represents community, a rainbow represents diversity and inclusion, squares in circles bring pixels to mind since music is more digital now, while the squares also mimic the colorful squares of Peacock Alley on Broad Street. The hip of the guitar is transformed into the top of Barnum Museum with a silhouette of the golden eagle with wings spread.

999 Broad St
This figure sculpture was created by prolific New Haven artist Susan Clinard. Lewis Latimer (Sept. 4, 1848–Dec. 11, 1928) is considered one of the most important Black inventors for the number of inventions he produced and patents he secured, but also for the importance of his best-known discovery: a longer-lasting filament for the electric light bulb. He helped Alexander Graham Bell obtain the patent for this and for the first telephone. As electric light spread across the country, Latimer was in great demand for his expertise later in his career. So the next time you switch on a light or use your phone, thank Lewis Latimer. The sculpture is installed in front of the Margaret Morton Government Center.

Sailors and Soldiers Monument in Seaside Park
Dedicated in 1876, this neoclassical monument commemorates Union Civil War and Revolutionary War soldiers. Melzar Mossman ran the Ames Company, a foundry that made statues and monuments throughout the US. Mossman was a Union soldier, a sculptor, and artisan. He sculpted the bronzes and the now missing marble female figure. In 2010 the Friends of Seaside Park and City Lights collaborated to replace the missing figure, choosing Emily Bedard, then a graduating sculpture student of Lyme Academy CT to sculpt and cast the monument figure. Emily is now a successful sculptor. The City Lights/Bridgeport Art Trail team are proud to have been a part of the development of this promising artist’s career. The sculpture is located on the eastern end of Seaside Park.

Recently Emily has sculpted the eagle for the newly renovated/constructed Newfield Library. To offer an opportunity to another young artist, painter Luis Lopez was chosen to paint and detail the eagle which will be permanently installed on the exterior of the building.

PT Barnum Sculpture in Seaside Park
There are several pieces of public art at Seaside Park. One can argue the park itself, designed by landscape architect Frederick Law Olmsted (the designer of Central Park in NYC), is a piece of art in itself. Speaking of arguing there is a sculpture that is controversial right now. It is the statue of Christopher Columbus, which was removed in the summer of 2020. The issue is still in dispute.

PT Barnum was the great museum founder, showman and circus entrepreneur, who put the hum in humbug… (Jenny Lind? Ok it’s a stretch.) Born in Bethel, he lived in Bridgeport, and was even the mayor here. Barnum donated the land for Seaside Park. The area of the park was the winter home for his traveling circus. The animals and circus entourage would literally parade off the train down Main Street. It is fitting that his “larger than life” bronze figure is enthroned on a massive pedestal, facing Long Island Sound as if he is contemplating new projects while enjoying his beautiful Bridgeport by the sea. This Barnum sculpture by Thomas Ball was awarded a medal at the International Exhibition in Munich in 1888, then shipped to a warehouse in Hoboken, N.J., where it was stored until the showman’s death in 1891. The sculpture can be found near the end of Iranistan Avenue in Seaside Park.

Wheeler Fountain
The focal figure of this small yet exquisite monument is a mermaid figure holding a child and a globe shaped torch. Sculpted by the renowned monument sculptor Gutzon Borglum, the Harral-Wheeler Fountain is such a visual treat, you may welcome a bit of traffic as you dodge across Park Avenue to catch an extra glimpse of this stunning oasis at the intersection of Park Avenue and Fairfield Avenue near St John’s Episcopal church.

The fountain was erected in 1912, donated to the City of Bridgeport by the heirs of Nathaniel Wheeler, descendants of Moses Wheeler, a resident of colonial Stratford CT who operated a ferry across the Housatonic River between Stratford and Milford. Nathaniel was a principal in Wheeler & Wilson, an early manufacturer of sewing machines. He moved his factory to Bridgeport in 1856. Serving in Connecticut legislature and as a director of the New York, New Haven, and Hartford Railroad, and of People’s Bank, he was active in many city affairs, including city beautification.

120 Middle St Post Office, Downtown Bridgeport
Post offices built in the 1930s during Roosevelt’s New Deal were decorated with enduring images of the “American scene.” Bridgeport, Connecticut was one of the cities to receive one of the beautiful murals that were a part of the Works Progress Administration (WPA). In 1936, Westport artist Robert Lamdin was chosen to paint a mural on the upper walls of the new Bridgeport post office. Three nearly life-size panels stretch over one wall of the lobby, depicting powerful images of an important part of American history, the transportation of mail, from stagecoach to post office workers carrying bags loaded with deliveries to airplanes transporting mail.

925 Broad Street, Burroughs-Sadden Library
Bud Riley dreamed of painting a wall, a big wall, and his dream became a reality in a mural measuring 14′ high and 40′ wide, covering a wall in the Information Services Department in the downtown public library.

A century of Bridgeport’s history (1836-1936) was created in a unique style developed and perfected by the artist. Delicate line drawings on linen, mounted on the wall and reworked with sepia acrylic brushstrokes depict a series of people and events. To express the passage of time and progress, Bud masterfully melds the movement of cubism with representational drawings by manipulating the placement of scenes and figures which overlap each other to create a panoramic view of Bridgeport’s past glory and industrial development. A credit to the artist’s style is his ability to superimpose people and events with a gentle perforated line quality.

As one moves from a distance towards the mural, a new scene or person comes clearly into view. From the first Mayor, Isaac Sherman, to the Mayor of the 1930’s, Jasper McLevy, from a horse drawn carriage of the 1800’s to the streamlined truck bodies of the Carlson Brothers of Metropolitan Body, from the lives of P.T. Barnum and Tom Thumb to the historic visit of Abraham Lincoln. A hundred years of growth unfold on the wall of the Bridgeport Public Library #9. All sequences have been thoroughly researched by the artist in the Library’s Historical Collections.


The Patron Saint of Beer Mural by Tom Sanford

Berlinetta Brewing, the newest brewery in Bridgeport, offering the fine sort of Pilsner you’d enjoy in Prague, has enshrined iconic barfly Cliff Clavin. As portrayed by Bridgeport native John Ratzenberger, this character from the classic television sit-com Cheers is perched on a beer-keg as he dispenses the brew in the manner of a classical fountain as found in a Roman piazza. Sanford’s playfully sardonic aesthetic infuses the essential elements of iconography (halos, gold leaf, symbolism) with humor. He packs a lot of iconic imagery representing Bridgeport into this well-designed composition – an elephant holding a Berlinetta beer can, a Remington rifle, and the iconic power plant graces the background with its identifiable red and white stack. Artist Tom Sanford held an Artist’s Talk & Beer Brunch on Sunday, November 14, 2021 at Berlinetta Brewing, 90 Golden Hill Street, Downtown Bridgeport.

What are some of your favorite public art sites in Bridgeport? Send us a submission to clgallerybpt@gmail.com Share them on our Facebook page (facebook.com/bridgeportarttrail) or tag us on Instagram (@bridgeportarttrail)